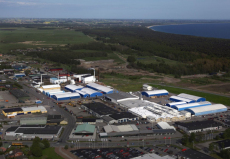 Scandinavia’s biggest compounder Polykemi AB – admits that during recent time - the magnitude of new technical investments has not been “up to the historic standard”, but now the management has decided that it is about time to return back to more normal conditions.

For 2014 the Polykemi Group has launched an extensive investment plan with a value of above 7 M EUR - both at the plant in Ystad Sweden as well as in Kunshan China. In the plant in Ystad two new complete production lines will be installed – one for conventional (Polykemi´s customer adapted) compounds and one intended for the product ranges of recycled materials REPRO and REZYcom. In order to improve both productivity & ergonomics – a robotic system for atomized bag handling will also be installed.

Ola Hugoson elaborates: For Polykemi AB gladly the year 2013 was a year of improvement compared to 2012 - where we found ourselves in a situation where the sanctions on Iran - made our businesses there practically impossible.

In terms of volume and turnover it turned out appr. like the second half of 2012 and that was mainly a result of the fact that some substantial projects where delayed compared to the initial time plan.

The 2013 result, being the most important in long term perspective, showed a healthy profitability and for 2014 we expect a further increase of volumes – not a “rocket launch” – it is more a continued steady growth, underlines MD Mr Ola Hugoson.

Polykemi AB is Scandinavia’s leading developer & producer of tailor-made thermoplastic compounds. Its product range includes compounds of almost all thermoplastics except PVC. Main applications PK compounds: For injection moulding & extrusion of exterior / interior parts for automotive, electronic, white-goods and many more applications. Polykemi is an innovative knowledge company. Our ambition is to work as close to our customers as possible. Our focuses are: security, highest possible competence / project application/optimizing & personal contacts.