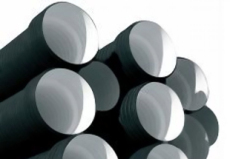 Plastika, a.s., a traditional manufacturer of plastic products in Slovakia, completely restructured its organization in 2013. These extensive changes resulted, among other things, in a number of new products in their main pipe system and fitting lines as well as in the area of film.

The company had previously offered mainly corrugated polypropylene pipes and fittings for sewer lines. The supply has now been expanded to include polypropylene corrugated pipes with a 20% thicker inner wall in order to extend useful life exponentially while providing greater resistance to abrasion. Likewise, the company has introduced a universal DN 400 inspection chamber with a polypropylene tube and three intakes. Responding to additional market requirements, production has been launched of polypropylene solidwall sewer pipes.
The solid wall trend did not bypass PVC tubes. The range of smooth-faced, triple-layer PVC sewer pipes has been supplemented by solid-wall PVC piping. The relatively successful water gauge chamber also saw innovation. The chamber is now wider, making it more convenient to handle inside. The upper part of the inner construction is detachable, a great advantage in repairing and replacing it. Also worth mentioning is the built-in check valve, which many competing chambers cannot offer.
New products have also appeared in the polyethylene film division. A flat film with 0.02 mm thickness has been developed, surpassing what had originally been the lowest possible thickness of 0.035 mm. This three-layer film is wound on paper tubes and comes in 1600 mm width. The film has a wide variety of applications, thought it is primarily used as a protective cover. A significant novelty is stretch-hood film. It involves a pallet packing system that many packaging companies have adapted. This type of film not only allows less foil to be used, but also saves energy and cuts costs for operating an assembly line while making the work safer.
Process rationalization and modernization carried out by Plastika, a.s. also includes introduction of EAN codes to make the company more attractive with further interest segments. In conclusion, the company’s 50 years of experience and its technical expertise should also be borne in mind. These aspects are a strong guarantee of product quality and the company’s further development.
www.plastika.sk/en