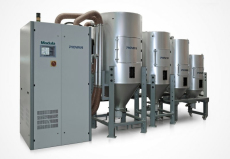 The main prerequisites at BMW, for the selection of plastic material handling systems, including conveying, drying and blending, are the evident characteristics of energy efficiency, ease of use, productivity level stability, ecological compatibility and sustainability.

In detail, for one of the new German production sites of the very innovative BMW i3 and BMW i8, when at the initial project stages, BMW specified to all potential suppliers that any of the processes necessary to convey, dry and blend the different polymers in use, had to be energy efficient and self sustainable. Also, the output claimed would be tested and compared, to assess and subsequently determine the ranking of performance.

Out of the testing period, that last 6 months, at which five major suppliers of auxiliary equipment took part, Modula of Piovan was regarded by BMW as the best solution, for its utmost efficiency of operation, energy utilization, auto adaptability and constancy of process conditions.

For the new program of production, that for the first phase saw the installation of six lines, BMW confirmed Modula as “the choice”.

Modula is the innovative auto adaptive and energy efficient drying system with multiple hopper assembly, that Piovan launched in the market in late 2010. Just recently, Piovan obtained a specific patent in certification of the innovative nature of the Modula solution. The two Modula set ups, supplied to BMW, were configured to also support an expansion to twelve production lines.

The materials utilized by BMW are mainly blends, with polypropylene or polycarbonate base, like PP/EPDM and PC/SAN. The plastic part is first injection moulded and immediately transferred to the painting lines, a very sensitive phase of the production process where silicone particles are banned. One very important feature of Modula is the absence of silicone components/parts within the system, making it fully suitable for applications such as the one of BMW. Two sets of Modula were supplied, each configured with single dry air generator and seven drying hoppers with volumes ranging from 600 to 1000 litres.

The purpose of hygroscopic plastic drying is to reduce moisture content to the required levels. This operation is generally performed by circulating hot dry air inside a drying hopper. In the case of applications that involve a number of materials of different kinds, a central unit is commonly used to generate dry air, which is then distributed to a series of hoppers, one for each material type, through a duct system.

This basic model goes against any principle of energy efficiency and certainly does nothing to reduce or optimise the system running costs. At BMW, the two Modula systems that Piovan supplied, automatically adjust and control all operating parameters for each individual hopper and hence use only the overall amount of energy strictly required. This is made possible through a specific controls software that interfaces the settings for each hopper with the data collected by the sensors installed on the system.

This means that, by using a Piovan patented airflow measuring device, located in the air supply line and at each hopper, the airflow can be adjusted and controlled instantaneously and individually, hopper by hopper. In addition, the total airflow is modulated automatically and efficiently by the central drying unit, equipped with IE3 class blowers, resulting in optimum process operating conditions.

Modula is today available for medium and large capacity applications (200 to 2000 kg/h) and provides energy savings of as much as 50% with respect to ordinary centralised drying systems of equivalent capacity. Modula is Winfactory ready. Along with Modula, BMW was supplied with Varyo auto-adjustable vacuum conveying systems, MDW gravimetric blenders and Winfactory supervisory system, all Piovan products.