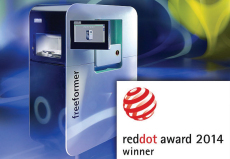 On 7 July 2014, the design world gathered in Essen for the presentation of the internationally renowned Red Dot Award. The 40-strong Red Dot expert jury evaluated a total of 4,815 submissions from 53 countries. The Freeformer is the first product from machine manufacturer Arburg to win the coveted, internationally renowned design prize. The pioneering additive manufacturing system thus takes its place next to products from top brands such as Apple, Audi and Adidas.

“As well as quality and functionality, a machine’s design is becoming increasingly important in the purchasing decision,” insists Herbert Kraibühler. The former Managing Director Technology & Engineering pushed the development of the Freeformer over the past ten years and, as of April 2014, advises Arburg on plastic freeforming. The Freeformer and Arburg Plastic Freeforming (AKF), which celebrated their world premiere at the K 2013, mark Arburg's entry into the future-oriented market for industrial additive manufacturing.

The machine manufacturer entrusted the design to Design Tech in Ammerbuch and its proprietor Jürgen R. Schmid. The industrial design expert’s remit was to pay particular attention to the recognisability, future sustainability and uniqueness of the Freeformer, as well as aesthetics and functionality. The results of the designer’s work include an easily accessible construction chamber with pivoting glass front, easy operation options and a fold-out PC with multi-touch screen mounted on the side. The high-visibility on/off switch also functions as an emergency-stop switch. In addition, care was taken to ensure that the Freeformer would fit through standard room doors.

The clear, soft lines of the housing are reminiscent of modern telecommunication devices and are well suited for use in a design studio or laboratory environment. The fact that the overall concept is successful in visual terms is evidenced not only by the positive feedback from customers and interested parties, but also by winning the Red Dot Award seal of quality.

Arburg is a leading global manufacturer of modular Allrounder injection moulding machines in which plastic parts can be produced in large unit volumes. In order to achieve high production efficiency when producing one-off parts and small-volume batches, Arburg has taken a new look at additive manufacturing from the perspective of a machine constructor and has invested all its expertise in the preparation and processing of plastics into the development of the Freeformer and Arburg Plastic Freeforming (AKF).

All that the Freeformer requires are a mains socket, 3D CAD data and standard granulate. As with injection moulding, the plastic granulate is first melted in a plasticising cylinder. A special nozzle then applies the droplets layer-by-layer onto a component carrier with three or five axes by means of high-frequency piezo technology. The desired three-dimensional component is thus created layer by layer. Because the process uses molten plastic, no dust or emissions are generated.