Energy efficiency for updating with ENGEL 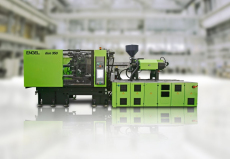 Rising energy prices and the demand for more sustainability often make manu-facturing systems that have been used for many years seem even older. ENGEL's new retrofit solution ecodriveR is reasonably priced, can be fitted with little hassle and reduces the energy required by existing hydraulic injec-tion moulding machines by up to 50%, increasing their cost - effectiveness significantly as a result.

EcodriveR means hydraulic injection moulding machines with an asynchronous motor and electric-hydraulic variable capacity pumps (EHVs) can now be controlled according to demand as well. This is achieved through the installation of a frequency converter that adjusts the speed of the pump drive to the amount of energy required. ecodriveR is set using a simple interface of the machine control unit, Wolfgang Degwerth, head of ENGEL AUSTRIA's customer service division, states: "Since a machine's hydraulic system remains the same when it is retrofitted, ecodriveR allows us to adapt older injection moulding machines to the requirements of modern production companies quite quickly and at a relatively low cost. The first few uses have shown that, depending on the application, it can reduce the energy required by machines by up to 50 % without affecting the cycle time, part quality or reproduci-bility standards.“

As with the ecodrive principle, the drives of an injection moulding machine with the retrofitted ecodriveR are only active when the machine is in movement, such as during mould opening and closing, plasticising and injecting. During the post injection pressure and plasticising phases, the speed is reduced, and during cooling, the drives come to a complete standstill and do not use any energy at all.

In addition to the significantly lower drive energy levels, both ecodrive and ecodriveR offer other advantages. For example, the reduction in the amount of heat released is particularly noticeable. Normally, the excess energy is converted into heat and emitted into the atmos-phere and the hydraulic oil. Both of these effects are almost completely eliminated when ecodrive or ecodriveR is used, which lowers the cooling capacity considerably and increases the lifespan of the hydraulic oil. One ergonomic advantage of the two systems is the reduced noise emissions, which are a consequence of lower average motor speeds.

The saving potential depends on different factors. Machine size and cycle time play a crucial role among other things. If, for example, POM technical parts with a shot weight of 109 g and a cycle time of 78.3 seconds are made on an ENGEL victory 330/125 injection moulding machine that has been energetically optimised with the ecodriveR system, 3.7 kWh of energy will be saved every hour, which means 46% less will be consumed compared to a machine that has not been updated. The 3.2 kWh/h drive energy reduction and the fact that the cooling/filter motor uses 0.5 kWh/h less energy make a major contribution here. If the machine is in operation for 6000 hours per year, the amount of electricity it uses will be cut by 22,200 kWh overall, which equates to six tonnes of carbon dioxide.

The retrofit option ecodriveR can be added to any ENGEL hydraulic injection moulding machine with three or fewer asynchronous motors and electro-hydraulic variable capacity pumps. In many countries, this investment is supported by funds from the public sector.