Radiation Crosslinking – way to improve the properties of polymers, Part 2 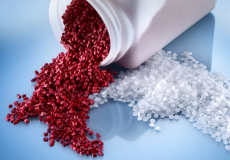 Continuation of the article on methods of improving the properties of polymers - radiation crosslinking from 16.2.2015.

The results of the Gel content measurements of TPE-E after irradiation is showed in Figure 4. The maximum of gel content (86.3%) is achieved at a dose of 198 kGy.

At lower radiation doses, a gel content of zero was measured for LD-PE and HD-PE (Figure 5, 6). Despite of these results, the tensile tests show an improving trend even at these low doses. This is explained by the formation of micro-gels, which form elastically active network chains and can transmit tension. In determining the gel content, however, these micro-gels pass the filter together with the soluble parts - sol. Gel content measurement accuracy depends on a size of used mesh sieve.   The maximum value of gel content for both polyolefines is at dose of 198 kGy. This value is 67.3% in case of LD-PE and 65.3% in case of HD-PE.

The influence of different doses of radiation on the mechanical properties is represented in tensile test, creep behavior results of the tested polymers (TPE-E, LD-PE, HD-PE) and were studied at ambient (23°C) and elevated temperature (80°C, 100°C).

The tensile strength results depend mainly on the degree of crosslinking and the number of tie molecules as well as on the crystal morphology.

The Modulus 100 (resulting stress at 100% elongation of the test specimens) rises gradually in line with the dose of irradiation. The Modulus 100 with a dose of 198 kGy is more than 50% higher than the non-irradiated specimens (Figure 7).

Elongation of the TPE-E goes down continually in line with the irradiation dose. At the highest applied dosage of 198 kGy, the elongation remains only at 25% of the former (non-irradiated) test specimens. Due to the irradiation, the TPE-E has significantly lost its flexibility.

At higher temperatures of 100°C, the positive effect of irradiation on the tensile strength is much higher: For LD-PE, after irradiation with 198 kGy it is nearly 60% higher compared to the standard (Figure 9), whereas HD-PE shows a mere 10 % increase (Figure 14).

At room-temperature, the irradiation has also a positive effect on the E-modulus of both types of polyethylene: After irradiation it is higher by 30-35% in case of LD-PE (Figure 10) and by 35 % for the HD-PE (Figure 15). On the other hand, at 100°C the E – modulus does not show any significant increase with both grades of PE.

Whilst the changes of the elastic module and the tensile strength of LD-PE before and after irradiation were in a similar magnitude, the changes in elongation at the tensile strength were quite different (Figure 13). Elongation of non-irradiated LD-PE was rising from the value of 67.6% at the room temperature to value of 74.1% at 40°C and then was decreasing to a value of 54.8% at a maximum temperature 100°C. In contrast, the elongation of the irradiated LD-PE increased throughout the measured temperature range from the value of 70.9% to a value of 91.2%.

• continuation of the article will be published on 2th March 2015