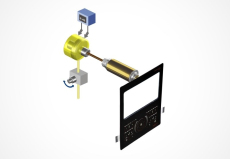 The three components: injection-moulded base plate, décor film with the relevant design and a film with circuitry for the touch-sensitive buttons on the panel. Using the carrier film, the décor film is taken from the roll and placed over the mould cavity of the moving half of the mould. Then the film with the circuitry is positioned and fixed in place in the fixed half of the mould. Once closed, a component just 2.5 mm thick is injected between the two films – the entire sequence uses the cascade injection-moulding process. Because this type of design and production harbours a very high potential for design freedom and savings, it is particularly interesting to the automobile industry.

The cornerstone for this innovation was laid by the film specialists at Leonhard Kurz Stiftung & Co. KG, in teamwork with the subsidiary company PolyIC GmbH & Co. KG, both of Fürth, Germany. They had succeeded in developing a process that combined IMD (In-Mould Decoration) with IML (In-Mould Labelling). Marco Roth, Managing Director of the company of the same name with a long record of experience in IMD, recognised the opportunity and in Krauss-Maffei Technologies GmbH of Munich he found a fourth project partner that could demonstrate its skills in the area of injection-moulding machinery, automation and finishing, complete with new feed lines that still to be developed. A fifth project partner was added for the design of the mould and the selection of the hot runner system: INCOE International Europe (see box: Project Partners).

As Volker Gründel, in charge of the hot runner area for this project, recalls: 'Direct gating, meaning using a valve gate nozzle to feed the plastic melt directly onto the décor film, is a very major challenge and is usually rejected in favour of gating by with a cold sub-runner.' Because melt that is under pressure collides with the film just 2.5 mm away if the valve gate opens abruptly, this can result in wrinkling or tears in the décor film - an 'absolute no-go' for an automobile industry in search of flawless surfaces. As a result, runner waste and a work step to separate the runner would have to be factored in. 'With SoftGate, though, we had another ace up our sleeve', Gründel adds with a wink.

To come to grips with the problems involved in cascade injection moulding, INCOE developed a valve pin speed control that permits controlled opening of the valve pin and prevents the melt from shooting out. This technology now permits gating directly onto the film without damaging or shifting the film. Engineering Manager Christian Striegel explains precisely how this works: 'With controlled, quick opening, SoftGate ensures that the melt flows gently onto the film, which is coated by and bonds well with the plastic without thermal or mechanical damage.' The benefits of direct gating are considerable: the utmost surface quality, problem-free integration of circuitry, production with nearly no reworking, and no runner waste whatsoever.

And in the case of the innovation of the 'operating panel with touchscreen sensors in a single shot', this means a perfecting of the production flow, including in the hot runner technology area. Not without some pride, Christian Striegel points out: 'Thus far, with our invention we've been able to improve product quality and stabilise processes; the chrome frame of the Audi Q7 is a typical example of this. Here, as project partners we're involved in the development of a new component and can offer the automobile industry an innovation free of compromises.'