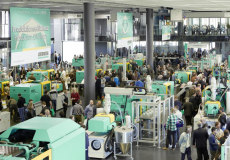 More than 5.900 invited guests attended the Arburg Technology Days 2015 event from 11 to 14 March 2015 to gain a detailed insight into industry trends and to see the highlights of the company's offering. The focus was laid on production-efficient processing technology, from one-off parts to high-volume production, from the Freeformer for additive manufacturing to the wide product range of Allrounder injection moulding machines. In addition, guests could visit the Efficiency Arena, attend expert presentations, check out a special service area and take tours of the plant.

“Once again this year we have put together a very interesting range of technologies and services for our international guests, presenting our innovative and production-efficient solutions and offering an insight into the future of efficient plastic parts production,” said Michael Hehl, Managing Partner and spokesperson for the Arburg Management Team. “As every year, we welcomed several thousands of visitors from all over the world. This is because there is no comparable event all over the world and because we can attend our customers in a more intensive and individual way, compared to the trade fairs."

The individualisation of mass-produced parts using the Freeformer was demonstrated in the Efficiency Arena. A pair of office scissors was used as an example, so that visitors could witness the combination of injection moulding and additive manufacturing, making use of Industry 4.0 technologies. Several different versions of scissor blanks were available for visitors to choose from. An Allrounder moulded the handles onto the scissors, after which a code was applied by laser to ensure unique traceability and to display all the relevant process data. At the Freeformer station, individually configurable 3D lettering in PP was additively applied to the scissors.

Furthermore, Arburg, together with partners, demonstrated the optimisation potential for production-efficient plastic parts production throughout the entire value-added chain at eight stations.

A total of five Freeformers presented the current progress in the development of Arburg Plastic Freeforming (AKF). The exhibits in the Efficiency Arena illustrated new possibilities for product design and mould technology, as well as the individualisation of high-volume items. One Freeformer demonstrated how new functional samples of scissor handles could be produced in the shortest time and how the parts could be optimally designed for additive manufacturing. Another system produced a scissor holder in an additive manufacturing process, as an alternative to conventional fixture construction.

For example, bellows made from TPU and key chains made from ABS with an articulated joint were produced in the Freeformer Technology Centre and the second discharge unit was used to process a special supporting material that can be easily removed in a water bath at a later stage.

A special micro production cell built around an electric Allrounder 270 A operated with the new Euromap size 5 micro-injection unit. Together with a linear Multilift H 3+1 robotic system, this formed a flexible system solution for the reproducible production of micro components, in this case micro counter wheels weighing just 0.004 grams. The new micro-injection unit combines the precise regulation of short strokes with high filling dynamics.

Visitors were able to see several systems demonstrating lightweight construction techniques. Arburg has collaborated with the Institute for Plastics Processing (IKV) from Aachen during research and development of the Profoam process and presented the latest technological advances. In the Profoam process, the plastic granulate is mixed with liquid propellant in a granulate lock upstream of the injection unit. An electric Allrounder 820 A was used to demonstrate how this method could be used to produce strong, lightweight, low-distortion parts with a homogeneous foam structure based on the example of a physically foamed airbag housing made from fibre-reinforced PP.

The cost-efficient production of high-strength lightweight parts using long-fibre direct injection moulding was demonstrated by a hydraulic Allrounder 820 S. It produced a high-strength pedal for the automotive industry.

Lightweight parts made from particle foam were produced on a hydraulic Allrounder 470 S and additional functions were integrated by injecting thermoplastic material.

Thin-walled items, screw caps, flip-top and multi-component closures were examples of the products on view in the packaging area. A “Packaging” version of a hybrid Allrounder 570 H demonstrated the cost-efficient production of thin-walled tubs. Two 14.3 gram injection-moulded parts made from PP were produced in a cycle time of around 3.9 seconds. The focus in this application lay on the test mould, which can be used on all Arburg packaging machines, irrespective of their size, and can be operated with two, four or six cavities. A further highlight was a Multilift V robotic system featuring the new “dynamic mould-entry axis” option for removal of the tubs.

A great stir was caused by a hydraulic two-component Allrounder 920 S which produced caps for five-gallon water bottles with an innovative cube mould. In a cycle time of only about ten seconds, 32 pre-moulded parts were produced and cooled on four sides of the cube, the second component was moulded and finished parts were removed during the injection moulding cycle. The material throughput was over 120 kilograms per hour.

A further multi-component product was a flip-top closure. A hybrid Allrounder 470 H was also presented, producing screw caps using an 8-cavity mould and unscrewing them using a hydraulic core pull.

Sophisticated, flexible and clean: these were the requirements which the applications for the medico-technical sector had to meet. A stainless steel version of an electric Allrounder 370 A, was used in a class 7 clean room to produce ampoule holders on a 4-cavity mould. Particle contamination in the production environment was also measured and analysed as part of the exhibit.

A further exhibit was an electric Allrounder 470 A that was specially configured for processing LSR in a clean environment. The machine and peripherals were positioned outside of the “clean area”, enabling cost-effective clean room production.

The overview was completed by an electric Allrounder 470 E with complex 8-cavity mould, equipped with a hot runner system and a lateral needle-type shut-off nozzle. This produced Y-shaped connection elements for use in intravenous drip therapy.

Extensive programme of side events

Visitors to the Technology Days also had plenty of opportunity to see machine production for themselves during tours of the plant. More than 1,500 German-speaking visitors made use of this possibility. Furthermore, all groups of foreign attendees visiting the Technology Days under the auspices of the Arburg subsidiaries and trading partners were given presentations of the company in their own language.

In the Service area, they were able to obtain comprehensive information on product training courses, spare parts management and preventive maintenance with special machine-specific service packages. There was also a demonstration of how the service life of the machines can be extended through regular maintenance and proper care.