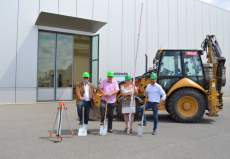 Construction work in the Czech Republic was officially launched on 14 July 2014 with a ground-breaking ceremony at the site. The new extension will significantly enlarge the existing Arburg building in Brno by 565 square metres to more than 1,600 square metres. The new capacity is mainly required to meet the continuously increasing demand for customer-specific production cells.

“Since some years we have a strong demand in the areas of automation and turnkey systems with annual growth rates between ten and 15 per cent,” explains Jaroslav Novak, Managing Director of Arburg spol. s. r. o. “We noticed these trends at a very early stage and have supplemented the capacities and skills of our team accordingly. Since 2005 we are present in the automation business in the Czech Republic and Slovakia and implement turnkey projects as general contractor in cooperation with local suppliers of peripheral equipment. Three out of a total of 28 employees are exclusively responsible for automation solutions and specific production cells. These experts are being supported by additional staff.”

The successful expansion of this sector has meant that there is no longer enough space in the existing building for constructing and testing complex systems.

Thus, in 2013, it was decided to extend the building originally erected in Brno in 2004. The ATC is equipped to extremely high specifications and currently covers 1,050 square metres of usable space, 300 square metres of which is taken up by the demonstration room. This provides space for up to six Allrounder injection moulding machines, which will be available for evaluating moulds, application tests and practical training purposes. In addition, there is a very well equipped spare parts store.

The extension will significantly increase the floor space by 565 square metres to more than 1,600 square metres. The new premises should be ready for occupation by the beginning of 2015 and will offer significant benefits, as Jaroslav Novak explains: “The extended capacities will give us enough space to build, test and optimize three automated production cells. Thus delivery times will be reduced in future too. In addition, our customers will have the opportunity to find out about the current state of the art in automation technology and to witness our expertise in this sector.”

Arburg in the Czech Republic: set for success since 1996

The expansion of the ATC in Brno is an important milestone in the success story of the Arburg subsidiary, which is responsible for both the Czech and Slovakian markets. Since its foundation in April 1996, the company has been managed by Jaroslav Novak. Thanks to his years of experience as a former Arburg trading partner, he is extremely familiar with both markets and brings invaluable expertise to the business operations. He has grown his team from three to 28 in the intervening 18 years, offering customers in the Czech and Slovak Republics first class, comprehensive support, including in the booming automation sector.