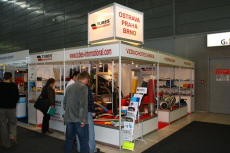 The International Engineering Fair confirmed its quality and a leading position among industrial fairs of Central Europe also in the present difficult economic situation. Among the exhibitors not even leaders of presented branches were missing, the proportion of foreign firms amounted to 37 percent. A promise for the future was the participation of 250 new exhibitors. The dominant branch Machine tools was located in the new Hall P which is the largest and most modern exhibition hall in the Central-European area.

Compared with the past year’s jubilee 50th MSV anniversary, the number of visitors dropped of ten percent. The participation of professionals agreeably surprised most exhibitors as they did not expect such a quality visitor structure. The visitors were in particular interested in the innovated products and discussed on supplies, some of them signed orders directly at the fair and concluded contracts. The proportion of foreign visitors will approach ten percent; missions of foreign businessmen came again from both the neighbouring countries and from CIS countries, regions of the Russian Federation, China, Egypt and some more countries.
The Brno Exhibition Centre drew attention of politicians, economists and also media. The National Economic Council of the Government (NERV) presented its final report at the fair. Traditional assembly of the Union of Industry and Transport CZ, attended by Prime Minister Jan Fischer and ministers of his government solved hot problems, such as state budget or support of research and development. Representatives of foreign countries, Secretary General of the European Committee for Cooperation in the Industry of Machine Tools CECIMO Philip Geerts, President of the European Logistic Association Alfonz Antoni, members of the Czech Parliament, senators, rectors of colleges and other VIP guests also attended the ceremonial opening of the fairs and the presentation of four Gold Medal Awards of MSV.
The emphasized topic Power engineering attracted a high number of professionals to the international conference “Nucleus against crisis?”, the interest of firms in the project “Modern energy sources” confirmed its importance also in oncoming runs. The other key topic was the cooperation of industry and colleges. In the new project “Transfer of technologies and innovations” altogether forty research teams and centers from ten TU and the Academy of Sciences CZ presented themselves. The fair Transport a Logistika had an extraordinary interesting accompanying program, among others the International Conference of Railways and a specialist conference by the Czech Logistic Association were staged.
Slovakia was the partner country of MSV 2009, at the fair also a cooperation exchange and a conference on businessmen environment in both countries were held. Partner country of MSV 2010 will be Austria.

At BVV ticket offices foreign visitors from fifty countries were registered, most of them came from Slovakia, Germany, Poland, Hungary and Italy. From a survey if followed that 81 % of visitors have attended several MSV runs and 90 % want to come also next year. Altogether 44 % of the respondents were interested in particular in novelties of products and services, 19 % took part in negotiations and established business contacts. A total of 75 % of interviewed visitors were satisfied with their visit to the fair.
At the Press Center altogether 404 media representatives from eight countries were accredited within the first four days. Foreign journalists (83) came from Hungary, Germany, Poland, Austria, Russia, Slovakia and Switzerland.