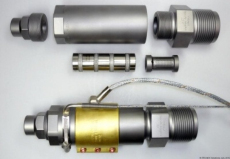 It is well known that static mixers – so called mixing nozzles help to avoid color streaks in injection molding. Less known is the fact that mixing nozzles can be used to solve many other quality problems, improve the process stability and reduce production costs. This article provides an overview about the opportunities and what is important.

Installation and how it works

In the screw of an injection molding machine the plastic material will be melted and additives such as masterbatch will be mixed with the melt. Screw design and control systems have been improved over the last several years in order to optimize and fasten this process as much as possible.  However due to the fact that injection molding is a discontinuous process the residence time of the melt in the screw barrel is uneven.    In addition, the screw barrel has to be heavily heated from outside in order to melt the plastic as fast as possible. These two effects lead to uneven temperatures in the melt both over the cross section as well as over the whole injection stroke. Uneven temperatures also create uneven melt viscosity and uneven melt velocities. These are prime reasons for using a mixing nozzle as shown in figure 1. The static mixer, when integrated into the nozzle of the injection molding machine, will homogenize temperature, viscosity and flow velocity over the whole injection cycle.  Figure 2. shows the temperature deviation over a whole injection stroke with a standard injection nozzle as well as with a Promix mixing nozzle.

Quality problems that can be solved with a mixing nozzle

Many quality problems in injection molding have their source in the uneven temperature, viscosity and velocity of the melt.  As a consequence an improved homogenization of these parameters help to improve mass tolerances and avoid undesirable effects like dull or brilliant surface areas. Weak areas affecting the strength of the plastic part created by flow lines can be reduced significantly.  Figure 3. shows an early collapse of an outlet area of a cartridge that could be eliminated by the use of a Promix mixing nozzle.  It is already well known that mixing

nozzles effectively avoid color streaks due to improved mixing. Figure 4 shows colour streaks spreading from the injection point of a molded part that could be significantly reduced by the use of a Promix mixing nozzle. A mixing nozzle is an efficient problem solver, and the injection molding process can be improved in many ways that also bring significant cost savings.

More and more processors today are using  direct coloring with masterbatch or liquid colors to reduce raw material costs and to increase production flexibility. However, it’s not always easy to get constant and even color shades because the result will be affected by the process conditions of melt temperature, back-pressure, screw speed and the color dispensing device. An accurate and constant gravimetric or volumetric color dispensing system in combination with a mixing nozzle is the perfect solution for this challenge.

The mixing nozzle assures that a constant and even color shade can be achieved independent from the injection moulding machine type and the processing parameters.

In addition, the consumption of masterbatch and liquid colors can typically be reduced by 15 to 25% depending on the color type and application. This is due to the efficient breaking down of color pigment agglomerates and the homogenized distribution of the pigment particles.

Depending on the type of polymer and the type of molded part, the melt temperature can often be reduced when using a static mixer because of its ability to reduce deviation of melt temperature. A possible reduction of 10 °C increases the energy efficiency significantly and results in shorter cooling times, which, depending on the molded part, can be a significant part of the whole cycle time. A producer of a 2.5 kg PP-container could for example reduce the cycle time from 120 to 110 sec based on a reduced melt temperature.

Color streak issues can be reduced by the increase of the back-pressure of the injection molding machine and the use of an increased quantity of masterbatch.  However, it is obvious that this approach is not economic and will lead to higher masterbatch costs and, depending on the polymer type, to reduced life of the plasticizing screw. Can a color streak problem be solved with a special mixing screw? To a certain extent yes, but at the same time there are some significant disadvantages in comparison to a well-designed static mixer.  The mixing performance of a mixing screw depends on the screw drive as well as on the back pressure. Destroying of color agglomerates, despite very high local shear rates in a mixing screw, is only partly possible because the shear impact is uneven and therefore ineffective.  Using part of the screw length for mixing tasks is always a compromise because less length for plasticizing will be available. Last but not least, the installation of a mixing nozzle is much faster and more cost efficient compared to the installation of a new screw.

Mixer geometry and a correct design are essential:

There are examples of when a mixing nozzle cannot help to improve the process: A mixing nozzle cannot compensate for a poor uneven masterbatch dispensing system.  Correct design and sizing of the mixing nozzle is essential to obtain the maximum benefit. The size of the injection molding machine, the clamping force, and the type of polymer all has an important impact on the design of a mixing nozzle. A poor mixer design or wrong mixer geometry is solving the problem only partly or not at all. In addition, the pressure drop can be too high or the polymer can build deposits inside the mixer and start to decompose.  A well designed mixer should not add more than 10 to 15% pressure drop to the injection pressure.

Also, the mixer geometry has an important influence on the performance. A very effective mixing over the whole cross section in a very short installation length and with minimal pressure drop is required in order to get a satisfying result. A single mixer geometry will not provide the same result for all process applications. An incorrect mixing geometry or design can lead to poor results that will often be interpreted as a general problem of mixing nozzles.

It is perceived by some that static mixers tend to build up deposits and that cleaning the mixers will be difficult. The opposite is true when the mixing geometry, housing tolerances and installation of the nozzle assembly are applied correctly. In general, a well-designed mixing nozzle does not have to be removed and dismantled for cleaning. The cleaning can be done in line with new polymer purging out the material in the mixer.

Figure 5. above, shows the results of inline cleaning tests with a Promix mixing nozzle demonstrating that a cleaning volume of only 3 times the mixer volume is enough to completely clean the mixing nozzle. This is much less then for example the cleaning of an empty pipe section or the cleaning of the plasticizing screw.

The mechanical stress impacting a static mixer during the injection cycle is enormous. The static mixer has to withstand on-going, alternating pressure drop loads of up to 100 bar (approx. 1500 psig). This can only be accomplished with static mixers made of high quality steel including an optimized mixer geometry and mixer design.  An on-going

Mixing nozzles are improving the process stability, reducing the masterbatch consumption, and they enlarge the processing window of injection molding processes. Many existing quality problems can be solved with static mixers in an easy, fast and economic way. Seeking the advice of mixing experts will assure success when selecting the right mixer for your process application.