The new GX900 from KraussMaffei 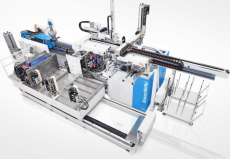 In the future, injection molding will mean much more than producing acceptable parts in rapid succession. Especially if customers demand just-in-time delivery, or even that the parts are supplied directly to the assembly line “justin-sequence.” The only option then is flexible automation of plastics production. A pilot plant at K2013 demonstrated impressively that high flexibility need not only be achieved at the cost of productivity.

Building up a flexible injection molding production unit is a planning challenge, and at the same time a big opportunity for the parts manufacturer. Especially if, despite relatively frequent retooling, the flexibility that he gains permits efficient production. Ever smaller release quantities thus lose their terror, and the possibility of processing the occasional urgent order at a reasonable price releases earnings potential. This presupposes that the flexible production system has been set up to easily allow several mold changes per shift of only a few minutes.

However, the design of a flexibly automated injection molding production requires a high degree of system expertise – from the injection molding process, mold change, through to the removal and stacking of the finished parts. For K2013, KraussMaffei Technologies GmbH, Munich, Germany, together with its automation division and the mold-maker Mundimold, set up a production cell with two different molds (transport crates with 6.7 and 9.5 s cycle time) (Fig. 1).

To ensure smooth production changeover, EAS Europe – the specialist for such tasks among the project partners involved (Table 1) – developed a fully automated mold change system for these applications. The overall production changeover takes less than three minutes, and can even be performed in one minute if the conditions in the production shop offer the necessary freedom.

With the planning of the project, it was very quickly found that it is not sufficient to solve the individual sub-tasks in isolation, and to string together the functional modules in series. Rather, an integrative solution must be found, in which as many functions as possible are overlapped in time, with optimized paths.

This statement is underscored by some typical examples. First, however, an overview of all the system components gives an idea of the complexity of the overall unit.

One Control System for all Technical Disciplines

At the heart of the system is the currently fastest (editor’s note: according to the manufacturer’s data) GX 900 twin-platen injection molding machine (clamping force: 9,000 kN) with a hydromechanical clamping unit, the GearX locking unit and the innovative GuideX guide, which ensures high platen parallelism. In a cycle time of 6.7 s, it manufactures collapsible transport crates for fruit and vegetables from polypropylene (type: PP Bormod BRF970MO) – with a shot weight of 395 g. Its electrically driven plasticationunit (screw diameter: 105 mm) and the high-performance screw optimized for material throughput achieve the necessary melt throughputs in parallel operation.

The MC6 machine control unit provides the operator with a quick overview of the functions of the machine and all peripheral equipment, such as robots and the mold changer. The latter communicates with the master system controller via the Euromap 71 interface. Integration of all control functions into the MC6 ensures reliable dataset management – with identical dataset structures, including the mold and gripper coding, to increase process reliability. The large display of the MC6 also includes the images from the Live Cam of the events in the rear machine area, which reduces the inspection work that the operator has to perform.

The control unit in particular offers an easy-to-learn uniform user interface that is intuitive to use. A horizontal mold changing system from EAS Europe consists of the new improved generation of magnetic platens, a mold preheating station, a double shuttle table with electrically driven roller system both on the table and in the machine for installing and removing the molds, and optimum sealing flat-face multicouplings for all media, which fully automatically produce all electrical and fluid connection flawlessly within seconds (Fig. 2).

Even in the initial planning of the manufacturing cell, it became clear what tasks must be automated and optimized with performance-improving measures.Thus, the very short cycle time of less than 7 s of the removal robots did not leave the removal robot enough time to perform the stacking of the finished crates on pallets.

After each shot, there was inevitably a waiting time for the removal robot to return from the stacking operation. That would have made nonsense of all the measures to obtain maximum performance in injection molding.

The planning team therefore opted to divide the work between two robots. The finished crate was taken from the mold by the removal robot in less than 1s. They could not be removed much faster even if they fell out. The linear robots equipped with ultra-high-speed drives on all axes (type: LRX 350 UHS) operations almost oscillation-free because of its lightweight construction. This eliminates performance-limiting oscillation decay times.The design for 350 kN load capacity also ensures high system performance even if there is a changeover to products with much greater shot weights.

Subsequently, the removal robot transfers the crates to a second robot – a process that had to be assisted with a trick by the planners.The deposition robot receives the crates from the gripper of the removal robot on the fly. This “handshaking” process requires high start-up and repetitive accuracy from both handling systems. For this purpose, the palletizing robot (type:LRX 350) has high-performance drives for rapid movements and precision gearboxes.

It always deposits the crates at the level of the topmost pallet layer – on the table plate of a servo-controlled lift table. When one layer is complete, the table moves down by one crate height.As a result, the deposition robot shares the vertical stroke with the lift table, saving travel time. Only this makes it fast enough to handshake with the removal robot. The system performance is increased again by the crates, which are automatically stacked ready for transportation. For both robots, a gripper station is also available for automatic change of the robot grippers on product change.

Three times per working day – as required by the production changeover specification, i.e. once per shift – the machine is retooled to different production tools for transport crates.With a conventional production concept, the productivity of the three-shift system would have fallen to 80 % – even though only 90 min. was set for each retooling (Table 2). The machine would thus have sacrificed a fifth of its production capacity; in practice perhaps even more if retooling is delayed by personnel shortages if the staff are working on retooling a different machine.

The injection molding and automation experts from KraussMaffei, together with the mold exchange specialists from EAS Europe and the mold manufacturer Mundimold, have worked out a highly flexible production concept that raises the productivity to 99 % with three retooling operations per working day. Thanks to the short production exchange of less than three minutes, the additional costs pay back rapidly over the 1,160 production hours per year that are gained. However, the exchange times, which have been shortened from three minutes to one minute, with the so-called “shuttle principle,” only achieve a gradual improvement in production efficiency.

The roughly 10 t mold, when not in use, rests on the horizontal mold table with direct preheating station. In the practical application – when more than two molds are ready for exchange – one mold storage system is integrated into the system and the mold required next is thus taken from the mold store in good time and introduced into the preheating station, so that it can be changed for the “retired” mold without delay.

Automatic Connecting and Disconnecting of all Media Lines

The double shuttle table automatically travels on rollers parallel to the machine until the free mold exchange station stands in front of the clamp unit. The injection molding machine control unit guides the user through the mold exchange operation in a secure interaction.

Via the new interface for peripheral integration, the MC6 communicates with the magnetic clamping system control unit. The magnetic clamping platens are released by reversing their polarity, so that the mold can be separated from the platens. Almost simultaneously, the MC6 control unit automatically and securely activates the separation of the ejector couplings and multicouplings (Fig. 3).

Then the clamping unit is opened by several millimeters, releasing the mold. An electrically driven roller console traverses the mold with the adapter plates out of the clamping region. To keep the tooling time as short as possible,the new MC6 data set is simultaneously recorded into the machine and automation.

Once the double shuttle table has taken over the previously running mold, it travels about 2 m further and moves the preheated mold into the transfer position (Fig. 4). The rollers of the double shuttle table and the roller console in the machine transport the mold between the magnetic clamping plates in the clamping area.The safety queries and the interactive MC6 control dialogue allow the clamping unit to be closed.

The magnetic platens are automatically activated and all media connections are reliably coupled to the newly developed flat-face high-speed couplings. The double shuttle table is equipped with preheating at both positions, so that the removed mold can be cooled at a controlled rate or the new mold can be heated to production temperature.

Approaching a Batch Size of One

The “fruit crate” model situation shows that the planning of automatic injection molding cells must be performed based on a detailed analysis of all the individual functions. What is more, the time required or each individual sub-step must be determined for each function. If the series connection of all the sub-steps leads to waiting times in upstream or downstream functions, this must be eliminated through creative system engineering.

The coordinating project partner,who integrates his suppliers into the planning team,must have the necessary system expertise. In the above-described example, fully automated mold exchange increases production efficiency to 99 % – resulting in a gain of 1,160 production hours per year and system. This is the only way to realize injection molding system that, besides a high degree of automation, show high flexibility and productivity and permit another step towards a batch size of one.