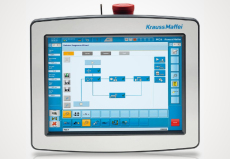 Injection-molded parts made of plastic are becoming more complex, as are the systems used to produce them. After the molding process, industrial robots are increasingly replacing “simple” linear ones. But they are more difficult and time-consuming to program than their predecessors. With integrated intelligence, the MC6 machine control system takes the strain off the programmer.

It is a real dilemma. Complicated products promise more value added for injection molding companies and, therefore, higher profits. But on the other hand, the work involved in programming and automation increases, as does the amount of staff training required. Whatʼs more, the often short life cycles of the end products exert growing time pressure. In this situation, a robot that is easy to program and operate can represent a decisive competitive advantage.
With the newly developed MC6 machine control system and the WizardX, VisuX, and ProgTechX programming and operating wizards, KraussMaffei is offering integrated control systems, which make automated production cells much easier to use. The new control system has been designed so clearly and intuitively that the user can work faster and more efficiently than ever before. The screen can be split into two areas with entirely different and independent content (SplitScreen). This enables the user to always keep an eye on the most important parameters, for example the actual value cycles and the status of the injection
process. The integrated ProzessDesigner gives a clear overview of all active processes. The processes can be modified as required, simply by tapping or swiping the screen.
In order to make handling of the control unit as user-friendly as possible, deeper navigation levels were generally avoided with the MC6. Favorites bars, which the user can configure individually, allow him to reach his destination as quickly as possible. Above these bars, the system makes only those buttons available that are actually relevant in the machineʼs current operating state. A special field enables all the components of
the production cell to be selected directly. In keeping with the energy-efficient overall concept for KraussMaffei injection molding machines, the MC6 control system has been equipped with an “eco button,” too, via which the user can optimize the machineʼs settings as regards energy consumption at the touch of a button. Standardized role profiles such as “machine operator,” “mold setter,” or “production manager” enable different authorizations to be assigned quickly and easily. New hierarchy levels and individual rights for particular users can be added to this model quite simply.
The MC6 control system features a resistive touchscreen, which can even be operated if the user is wearing gloves. The dualtouch function enables the screen to be operated with two fingertips, a process with which many users will already be familiar from their smartphones. But all that is not enough: all functions are available not only on the machineʼs display, but also on the robotʼs handheld pendant. This even applies to programming, for which the MC6 also provides active support.
The integrated “WizardX” graphical programming wizard helps to establish the sequences of operations for linear robots. From defining work steps to determining the relevant positions and teaching, from fixing the approach coordinates on the real object to, finally, automatically generating the error-free basic program from the data entered, “WizardX” does the majority of the time-consuming entry and programming work on the userʼs behalf. This enables the user to avoid programming errors and save time and money.
The MC6 takes the strain off people even when it comes to the undeniably difficult programming of the six-axis industrial robots commonly used in plastics processing. “ProgTechX” simplifies its communication with the robot by means of a programming  interface, which reduces the complexity of the robot functions to the essentials. Command libraries and in-line forms make the path to achieving an error-free program much shorter. With its graphical interface, the MC6 makes it easier to find particular functions in the command library. All the user has to do to transfer a certain command into the program is click on its button. Typing
errors are a thing of the past.
Of course, the MC6 facilitates day-to-day operations, too. In “VisuX,” KraussMaffei has developed an interface that provides the user with all necessary information about the industrial robot (for example, programs selected, counters, times, current axis positions) in a clear format. This means the user is always able to diagnose the current production process and to adapt it as required.
A particular benefit is the way in which “VisuX” is integrated into the interface of KraussMaffeiʼs MC6 machine control system, thus enabling the robot to be operated from the panel of the injection molding machine. And vice versa, the machine can be operated and programmed from the robotʼs handheld pendant. This mutual access makes it easy for the user to find the relevant information quickly in any situation. Man can master the machine in the very best sense of the word.