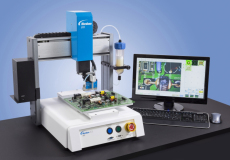 Those were exactly the factors that Shure Incorporated found attractive when they were looking for a new automated dispensing system for their Niles, Illinois R&D facility. Shure is a world-renowned leader in the design and manufacture of microphones, wireless systems, earphones, and headphones. Founded in Chicago in 1925, Shure today is a global company with plants in Suzhou, China, Eppingen, Germany, and elsewhere. Its audio systems are used in international venues, including the Olympic Opening Ceremonies, The Tonight Show, in the USA White House press room, and by recording giants such as Bruce Springsteen, Paul McCartney, Taylor Swift, and Coldplay.

“We needed another robot to design future products,” explained Bill Potter, manufacturing engineer for Shure. ““Shure has worked with Bill Binkley of Nordson EFD and used EFD products for more than 22 years. Our Janome robot is still great, but we needed it in our Asia office so I planned to get another one for our facility here.

“When Bill started telling me about the new EV system, I got really excited,” said Potter, who has been with Shure for more than five years. “All the accessories are already built in as a standard product, and the simple vision system will make programming much faster, easier, and more accurate. Since we plan to use it in R&D for several different products, having the flexibility and easy programming are exactly what we need. We didn’t need the larger platform or extra features of the PRO system, but maybe we’ll consider that or another EV system for next year.”

Shure purchased the 300 x 300 E Series platform to use for dispensing fluids including UV adhesive and 1- and 2-part epoxies. Programming was especially important because of the challenges that Shure faces in making increasingly smaller parts for wireless devices. They felt the EV system would fulfill their needs for future products. Other dispensing companies weren’t considered because Shure has had a long, successful relationship with EFD and its products, and with EFD application specialist Bill Binkley. Shure also uses Nordson EFD air-powered and handheld dispensers.

“When Bill at Shure told me he wanted another robot for his R&D facility I knew he’d want the EV Series when he saw it,” said Binkley, “He wanted a dispensing system that could accurately and reliably dispense fluid and that could be easily programmed and adapted to many different applications. When Bill saw that all the built-in features were included, such as downloading to autocad and simple vision, and for almost the same price, the decision to upgrade to an EV was easy.”