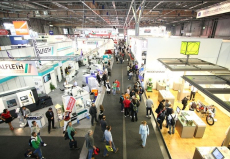 On 7 to 11 October 2013, the Brno Exhibition Centre will host the 55th International Engineering Fair. Organizers expect 1 500 exhibiting companies from all key industries, from machine tools manufacturing to electronics and automation. Who is still considering participation should not linger long with their application.

"We are happy with the interest to participate in the fair and the halls are already almost full. Companies who want to present themselves at this year's fair and want to choose the area according to their preferences have a high time to sign up because of there are not many vacancies left," says MSV director Jiří Rousek.

As in the previous years, about a third of the exhibitors who applied are from abroad this year, especially from Germany, Slovakia, Turkey and Italy. Turkey as a partner country of the year is represented by approximately fifty companies, which opens up many opportunities for contacts in this dynamic market. Furthermore, companies from Spain including its Chamber of Commerce are returning to Brno, and new territories also include Denmark. In addition to traditionally participating foreign companies, entirely new exhibitors from Poland, Germany, Austria, Italy or Romania will introduce themselves. An interesting newcomer is a Russian company LLC Autocomponents - GAZ Group and after nine years, the Slovak bearing manufacturer ZVL SLOVAKIA returns to the fair.

Several countries will once again be presented through an official stand. The stand of the Republic of Udmurtia from Russia will be an interesting feature, bringing together six exhibitors. Countries that are presented through an official exhibition will also be joined by Great Britain after a long time. Their stand is prepared by the Association of Engineering and UK Trade & Investment. Traditional formal expositions are prepared by the German states of Bavaria and Thuringia and the Federal Ministry of Education and Research, other states include Slovakia, Russia, China, France, Switzerland and Austria.