ARBURG at the Euromold 2014: Two freeformers to produce functional components 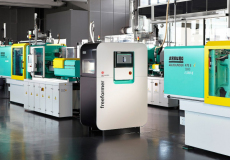 From 25 to 28 November 2014, ARBURG (Hall 11, Stand D25) will present the current progress in the development of ARBURG Plastic Freeforming (AKF) at the Euromold 2014. Two freeformers will demonstrate the industrial additive manufacturing of complex components with supporting structures.

The freeformers will produce finished functional components based on 3D CAD data from standard granulate. The two exhibits will be equipped with a component carrier that moves along three axes and two stationary discharge units. The second unit can be used for an additional component in order to e.g. produce a component in different colours, with special tactile qualities, or as a hard-soft combination. Brand new is the option of building up complex water-soluble structures from a special support material.

An application of this type will be demonstrated by a freeformer at the Euromold 2014 based on the example of a spare part made from ABS – in this case a two-part sliding lock which is used in the ALLROUNDER injection moulding machines. The second freeformer combines a standard elastic TPE material with water-soluble supporting structures – a first in additive manufacturing. Possible applications include e.g. gaiters, hoses, sleeves, or flexible components for robotic grippers.

As a further option, a supporting structure can be built up in the same material as the component itself. A thinned out intermediate layer with specifically generated predetermined breaking points enables the supporting structure to simply be broken off mechanically at a later stage. This option is preferred for components with free-standing structures and clearly defined edges.