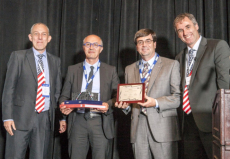 Automotive supplier names robot-maker Sepro as one of three Premium Suppliers and gives the company a special award for Technological Leadership.

According to Eric Pichot-Duclos, Tool & Equipment Purchasing Director, Faurecia defines strategic and premium suppliers based on a performance “scorecard” that tracks a host of criteria including innovation, quality, service and financial stability. This is combined with an analysis of the supplier’s strategic importance. Finally, it also considers the share of Faurecia purchases in a particular category each supplier has earned. When it comes to injection molding robots, Sepro’s share of Faurecia’s business is 90%.

Besides Sepro, two other companies received the same designation: plastic parts supplier China Tool and ARaymond Automotive, a supplier of fastening systems that, coincidentally, is also a Sepro customer.

“We are extremely honored to receive this recognition from our largest customer, Faurecia,” comments Jean-Michel Renaudeau, CEO of the Sepro Group. “We share many of the same core values including a commitment to be global, to deliver the highest quality and the best service, to be agile and flexible, and to provide a real technological advantage to our customers. So, to be chosen as one of only three suppliers in the world to receive this award is very gratifying.”

Sepro was also selected to receive a separate award for Technological Leadership. Technological leadership is a key strategy for Faurecia, according to Eric Pichot-Duclos and encouraging and supporting its suppliers to innovate is one of the company's purchasing priorities.

“We believe Sepro has a leading technological profile,” he says. “By that, I mean that they do not look at technology as a benefit in itself. Instead, they offer the latest technology because it provides added value… because it brings their customers, like Faurecia, a competitive advantage. It is technology that makes sense.”

Founded in 1973 and now headquartered in La Roche-sur-Yon (France), Sepro Robotique was one of the first companies in the world to develop Cartesian beam robots for injection-molding machines, introducing its first CNC controlled “manipulator” in 1981. Today, Sepro is one of the largest independent sellers of Cartesian robots. Customers around the world are supported by wholly-owned daughter companies in Germany, Spain, Benelux, the United Kingdom, the United States, Mexico, Brazil and China. Numerous direct sales and service offices as well as independent business partners, distributors and service hubs extend Sepro’s global network to over 40 other countries. The company’s global turnover for 2013 was €66.5 million, with 90% of sales exported from France and 45% sold outside of Europe. Sepro is the largest robot supplier to the automotive industry in Europe and North America, and has equipped more than 25,000 injection-molding machines worldwide. Sepro anticipates it will grow 15% in 2014.