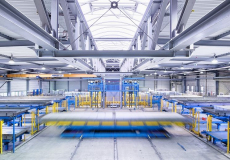 Lightweight materials are crucial for climate-neutral production. Plastics are often effective in this context. However, depending on the application, they have to stand up to high temperatures and extreme conditions. Radiation crosslinking of thermoplastics offers new potential for lightweight construction as conventional plastics can also be qualified for demanding tasks with this refining process.

Energy-rich ionizing gamma and beta irradiation is suited for the destruction of harmful microorganisms in a sterilization process. This is a well-known fact, but less well-known is the ability of beta and gamma rays to improve the properties of thermoplastics. When energy-rich gamma or beta rays are applied to plastic components, they trigger chemical reactions in the material, linking molecules in the process – similar to vulcanization of rubbers. This results directly in increased durability and resilience of the treated products.

Following irradiation, plastics show significantly improved properties in terms of heat and abrasion resistance, stability and creep behavior. With radiation crosslinking, the mechanical, thermal and chemical properties of commodity and technical plastics receive an upgrading as it were. After treatment, they have the properties of high-performance plastics and are able to replace these high-tech materials in certain applications.

High-energy beta rays are generally used in the technical field for physical radiation crosslinking. In order to receive the desired material properties, the crosslinking of plastic molecules is controlled by a specified radiation dose.

Beta rays are accelerated electrons and are generated through electron accelerators that are comparable to a Braun tube. A hot cathode emits electrons which are accelerated in a high vacuum under the influence of a strong electrical field. In this cyclical alternating field, the electrons achieve a maximum energy of 10 MeV (4.45e-19 kWh) in several stages. On leaving the accelerator, the electron beam is then deflected in an alternating magnetic field so that it reaches the products to be irradiated as a fan-shaped beam (Figure 1).

With the help of an automated transport system, the products are conveyed through the irradiation field; the irradiation process itself, in which the material absorbs the radiation energy, only takes a few seconds. Chemical bonds are broken down and free radicals are created. These radicals undergo the desired molecular bonding in the next step. In this way, an extremely resistant three-dimensional polymer network is created (Figure 2).

After the radiation crosslinking, the products are able to be used under conditions, which they would not withstand otherwise. Generally, radiation crosslinking is carried out after molding. The manufacturer can use conventional raw materials for injection molding, extrusion, blow molding, or thermoforming as usual. The range of properties that can be achieved is dependent on the relevant basic polymer. For some plastics, special additives are necessary. The addition of these crosslinking additives can take place in the production of plastic granulate (compounding) or directly before the molding (master batches, for example). Additives enable or improve crosslinkability, and can further optimize the properties of the plastic. Crosslinking additives (such as TAIC) well-known from the plastics and rubbers industry are used. Following irradiation, special material tests are carried out to evaluate the achieved changes in the properties.

Figure 3 shows technically relevant plastics arranged as a performance pyramid. The base is formed by inexpensive commodity plastics or technical plastics whose mechanical, thermal and chemical properties can achieve those of high-performance plastics through radiation crosslinking. These plastics form the peak of the pyramid.

Table 1 provides an overview of the polymers which can be crosslinked by radiation.

Thermoplastic materials become thermoelastic through the process of radiation crosslinking. Through the crosslinking reaction, a network is created that suppresses the flowability of the plastic – at higher temperatures the material behaves like an elastomer. The improved heat resistance and the significantly improved mechanical characteristics are key features of radiation crosslinking. As shown in Figure 4, the moduli above the crystalline melting temperature virtually go down to zero in the case of PA66 that is not crosslinked. By contrast, the considerably higher moduli of a crosslinked plastic guarantee sufficiently high strength even at temperatures above 350°C. In addition, the thermal expansion coefficient decreases. Crosslinked PA66 shows a temperature index improved by 20°C (5,000 h; 60% reduction of fracture strain).

Radiation crosslinking improves the mechanical firmness of strengthened plastics already at room temperature. In particular, the better coupling of filler materials to the polymer matrix contributes to this, which is caused by the activation of the interfaces. The weld seam strength of vibration welded components as well as the bond strength between material combinations (for example, polymer/polymer and polymer/metal) are increased through radiation crosslinking. The requirements for materials used in transmissions and sliding components, such as gear wheels, bearing bushings and slide bushings have increased considerably. Radiation crosslinked components can be an economical alternative to metal materials or expensive polymers (PEEK, PAI, etc.).

Frictional and tribological behavior is an important selection criterion for machine elements made from plastic. At increasingly higher operating temperatures, friction, wear and tear shorten the service life of slide bearings and gear wheels. As a rule, an increased concentration of amorphous parts in the material found on the surface of plastic components due to the manufacturing process shows unfavorable wear behavior. It is precisely these amorphous parts that are particularly suited for radiation crosslinking, whereby substantially higher sliding speeds can be achieved under simultaneously reduced wear coefficients. For example, polyamide not crosslinked, and exposed to friction has an application limit of 120°C. Radiation crosslinking prevents melting of the material and increases the permanent operating temperature by up to 100°C at a simultaneously reduced wear rate. Consequently, gear wheels made from radiation crosslinked plastic can replace metal components and are substantially lighter.

Crosslinking of plastics considerably reduces the solubility and swelling caused by solvents. For example, this is used to determine the crosslinking level through the extraction test. The resulting gel value directly correlates with the degree of crosslinking. If the degree of crosslinking increases, the swelling degree decreases at the same time. Radiation crosslinking equally improves the resistance against aggressive media (e.g., brake fluid or electrolytes) and hydrolysis. This becomes apparent, for example, in the improved stress crack resistance and significant strength reduction following exposure to solvents.

The savings potential is even more noticeable when taking into account not only the expenses for granulate, but also the process costs for the production of the components. As opposed to high-performance plastics, compounds that can be radiation crosslinked are particularly characterized through their simpler processing. In particular, the lower processing temperatures of radiation crosslinkable polymers as compared to high-performance plastics and the low effort for postprocessing with respect to thermosets have a positive effect on the production costs. Table 2 shows this based on a polyamide crosslinked by radiation.

Lower energy consumption, shorter cycle times as well as lower tooling costs with a longer service life have a direct impact on the production costs of the components. The full potential of radiation crosslinking can be tapped if the radiation crosslinked material is already factored into the development process right from the beginning and not only then when a substitution process is applied.

Plastics are becoming increasingly important as raw materials in the automotive industry. At the same time, the materials are subject to high thermal, mechanical and chemical demands. In this context, radiation crosslinking offers a viable solution, in order to expand the range of applications of more cost-efficient materials and materials already established (for example, PA). This helps to save on raw material costs and, at the same time, to narrow down the increasing diversity of raw materials. If the plastics, in addition to high temperatures, are exposed to, for instance, aggressive media or high mechanical loads, radiation crosslinking improves the aging behavior. Thermoplastic elastomers whose application is frequently limited due to insufficient compression set can be optimized through radiation crosslinking in such a way that they fulfil the high demands placed on vehicle construction. Further application possibilities are, for example, elastomer seals which are produced using two-component injection molding and subsequently radiation crosslinked. Given an ideal combination of materials, the housing and the injected TPE seal are crosslinked in a single processing step.

Lightweight construction using plastics instead of metals: Fixture elements such as bolts and nuts, holders or clips out of metal can be substituted by radiation crosslinked polyamide. The large number of fixture elements in and on the vehicle enable a reduction in weight by a factor of > 5 in this area. This contributes to cutting down the total weight and reducing the manufacturing costs (metalworking versus injection molding). It is also conceivable that load-bearing body components are made from thermoplastic composites, for example.

Organic sheets: Multi-material construction methods are supposed to fulfil the demands placed on them at minimum weight. In this context, thermoplastic organic sheets play a more important role in large-scale serial production. Radiation crosslinked components, which are stronger and have a higher heat deflection temperature, accelerate the processes of 3D thermal forming.

LED technology: The temperature in LED headlights is higher than in conventional headlight systems due to the compact design and power electronics. The requirements profile for the housing components and especially for the reflectors is clearly changing and can be fulfilled with the help of radiation crosslinking.

Vehicle power supply: To some extent, electric vehicles are equipped with batteries with over 800 volts that can be charged at quick charging stations with up to 350 kilowatts. If a direct current is used, the current can reach up to 500 amperes. Likewise, the energy transfer from the battery to the drive requires cable systems with large conductor cross-sections and temperature-resistant insulation materials.

Autonomous driving: Assistance systems are the basis for automated driving functions. Actuators perform a variety of functions here. They are used in lane departure warning systems, in the throttle control for adaptive cruise controls, in electronic braking systems or for automatic transmissions. The motors have to be compact, lightweight, quiet and durable, or more specifically, maintenance-free.