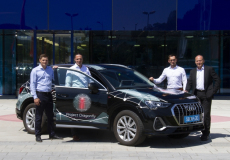 Following intensive research and development work, ZKW presents “Project Dragonfly” for autonomous driving, which was developed in cooperation with partner companies. As part of this concept, the lighting systems specialist has built a demo vehicle in a number of expansion stages, integrating sensors and cameras in headlights and thereby enabling automated driving functions.

Since June, the first test drives have been completed on four approved routes in Austria. “The aim of Project Dragonfly is to promote autonomous driving using an electronic all-round view,” explains Stefan Weißensteiner, the Project Manager of Project Dragonfly at ZKW. “Our new technology will make a decisive contribution to increasing road safety and could already be launched in three to four years,” explains Oliver Schubert, CEO of the ZKW Group.

The headlights are placed strategically to provide a 360 degree view of the vehicle using sensor systems. This is much like a dragonfly, whose gaze also covers 360 degrees. ZKW has integrated high-resolution cameras into the headlights of the Project Dragonfly test vehicle. Gradually, additional sensors such as LiDAR, CMOS, infrared or multispectral cameras will be integrated into the headlights at 4 strategic corners of the vehicle. Thanks to artificial intelligence, these sensors can recognize other road users and traffic signs, calculate distances and speeds, as well as generate control commands for the vehicle. ZKW digital light with a resolution of 1.3 million pixels per light unit will support the sensors for autonomous driving. “In the first experiments, we demonstrated that objects such as pedestrians during the night or in bad weather can be detected by artificial intelligence at an even greater distance with a significantly higher detection rate, without blinding other road users,” explains Ralf Klädtke, CTO of the ZKW Group.

The first stage of the Project Dragonfly involves the integration of artificial intelligence cameras into the main headlights in order to expand the field of vision, allowing them to safely detect vehicles in front or oncoming traffic, as well as in cross traffic. By the end of the year, the demo vehicle headlights will be expanded using LiDAR systems for optical distance and speed measurement as well as newly developed digital light modules. Furthermore, infrared and radar sensors as well as additional cameras are planned to realize a 360 degree view. “Depending on the manufacturer, 30 to 50 sensors will need to be installed on the vehicle for automated driving on levels 3 to 5. We are therefore working on solutions to build sensors with an elegant design in the headlights and to take advantage of the headlight space with for instance power supply, connection to data bus, electronic control units or condensation/de-icing or cleaning,” explains Klädtke.

Use of synergies with partners

As part of Project Dragonfly, ZKW is working closely with strategic partners such as IAV (Automotive Engineering), a company which has over 20 years of experience in the development of automated vehicles. In IAV, ZKW has gained a globally leading partner for autonomous driving in order to be able to make a contribution to safety via digital light and sensor technology in headlights. “ZKW has innovative ideas for using digital light and the 4 exposed sensor positions, the vehicle headlights, which also represent a promising new approach for high-performance automated driving for IAV,” explains Mirko Taubenreuther, Senior Vice President, IAV GmbH.

ZKW also closely cooperates with the LG Group in order to use and implement possible synergies, for example in the areas of sensor cleaning, development and data processing. “The aim is to use our shared know-how and create interfaces between our companies and other cooperation partners. This will enable us to offer our customers the best solutions for the vehicle,” says Schubert.

Development projects together with customers

Several pre-development projects will be launched with car manufacturers in the near future, which will promote the integration of sensors in headlights for autonomous driving. For example, a LiDAR system is integrated into a main headlight to analyze the measurement data generated from the light unit in order to use this for follow-up projects. “Our customers benefit from new headlight functionalities and an overall solution which also meets their design requirements,” says Schubert.